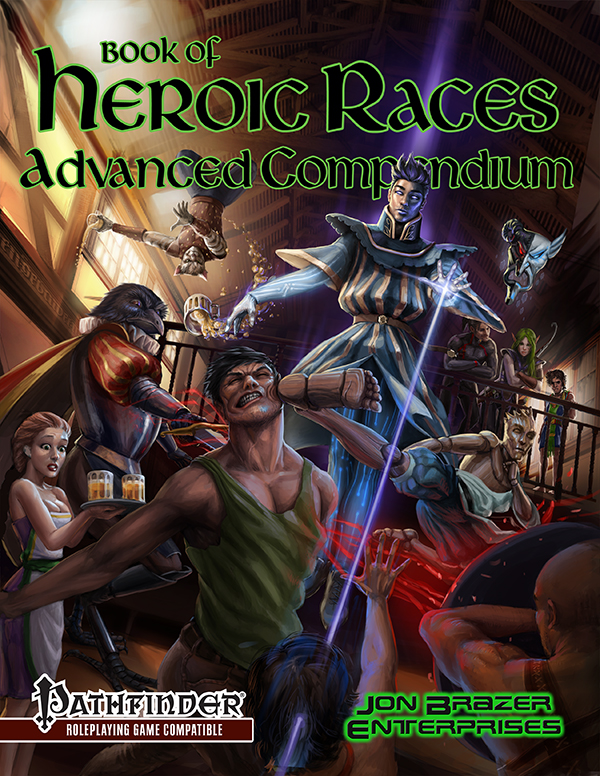 Work on the Book of Heroic Races: Advanced Compendium started around the time that Paizo released the Technology Guide for the Pathfinder Campaign Setting. Since Paizo added to the PRD some of my authors thought that it could be referred to like any of the books in the Pathfinder Roleplaying Game book line. Alas, Paizo did not allow it so I had to constrain my authors, initially.

When we were ready to release the Advanced Compendium, I used the technological material already written and contacted those that had asked me about it during the book’s roll out if they wanted to develop more material for it. The result of which was included in Appendix 2: Racial Technology.

This really help integrate this book with Starjammer. Starjammer is produced by the people behind d20pfsrd.com and is best described as Pathfinder in Space with Technology. This book integrates rather nicely with that supplement. Here one such option that goes great with that book from the Book of Heroic Races: Advanced Compendium.

Much like our post on 10 True Things about Catfolk, we have 10 things about elans. Instead of things that are true, we bring to you misconceptions concerning this adjusted race. Submitted for your enjoyment, 10 Elan Misconceptions.

From the seas below to the skies above, from the land to the stars, heroes are all around us, and they come in many different forms. Now you can go beyond the common races and play a member of these 12 imaginative races in your game. Delve into each race’s culture and see the world from their unique point of view. Play a character that you have always dreamed of playing, with all-new specific character options tailored to each race’s flavor. Expand your horizons and your gaming experience with these Advanced Races today!

Book of Heroic Races: Advanced Compendium is the essential guide for playing untold numbers of characters. This 254-page supplement features:

Be Heroic With These Advanced Races Today!

I asked some of our authors to write 10 True Things about their race. And with the impending release of the Book of Heroic Races: Advanced Compendium for the Pathfinder Roleplaying Game, we thought we’d share them with you. Today we are sharing catfolk. We hope you enjoy them.

Tuesday February 14th—Valentine’s Day—sees the launch of the Book of Heroic Races: Advanced Compendium. This has been a work in progress for over two years. So what exactly is inside it?

Well each race has about 16 pages of material, describing the race, their culture, their view on the world, how others of their kind interact, their religions, and of course plenty of Pathfinder gaming stats. Like what? Well we start off with the Racial Traits, follow that up with alternate racial traits, character traits, a veritable horde of archetypes and other class options, mundane equipment specific to their race, and spells and magic item commonly created by members of that race. We finish off each individual section with ideas for you to integrate this race into your game and NPCs so you can us this race in your game right away. As a bonus we threw in favored class options for this race for over 40 different classes. Sure every class in the core rule book is covered here but so are the classes from the Advanced Player’s Guide to the Advanced Class Guide as well as Ultimate Psionics and the Time Thief thrown in for good measure.

You want more? Well how about some racial technology for those that want to play a Pathfinder in Spaaaaaace.

The one exclusive look I want to post is the maps from Deadly Delves: Quests of the Sands, but I have been busy and away from my computer. In the meantime, however, I can show you something about Book of Heroic Races: Advanced Tengus that I have been wanting to show off for a while. Let’s take a look at the spells within.

These spells are incredibly thematic and perfect to really make your tengu characters come alive. I also want to point out just how much we integrated the Advanced Class Guide. The new spellcasting classes in that book are getting some real love. Here are two of the spells within.

Murder of Crows
School conjuration (summoning); Level arcanist/ sorcerer/wizard 2, bard/skald 2, druid/hunter 2, shaman 2, summoner 2, witch 2
Casting Time 1 round
Components V, S, M (a handful of shiny coins)
Range close (25 ft. + 5 ft./2 levels)
Effect one swarm of crows
Duration 1 round/level
Saving Throw none; Spell Resistance no
You summon a swarm of crows. Use the stats for a bat swarm (B1) without the blindsense ability. The swarm attacks the nearest creature. If the caster is a tengu, he can control the swarm by concentrating during the spell’s duration. Otherwise, the caster has no control over its target or direction of travel.

Steal Eyes
School necromancy; Level antipaladin 4, arcanist/sorcerer/wizard 4, cleric/oracle/warpriest 5, witch 4
Casting Time 1 standard action
Components V, S
Range close (25 ft. + 5 ft./2 levels)
Target one creature
Duration instantaneous
Saving Throw Fortitude negates; Spell Resistance yes
You rip the eyes of your target from their body, calling them into your hands. The target permanently gains the blinded condition, and the pain of losing their eyes causes them to be sickened. The sickened condition and associated penalties are pain effects and can be removed by any magical healing or a full day’s rest. Since the target’s eyes are physically removed, the resulting blindness cannot be cured by remove blindness, but can be cured by heal, regeneration, or similar abilities.

Stolen eyes can be used in a spell such as scrying to strengthen the bond between the caster and the target or can be used as an additional material component for a spell you cast in the next round that targets the same creature. This consumes the stolen eyes and increases the save DC of the saving throw for the creature by 1.

Download the Book of Heroic Races: Advanced Tengus for Pathfinder at DriveThruRPG/RPGNow, d20PFSRD, and Paizo.com.