5e: Path of the Pyrorager 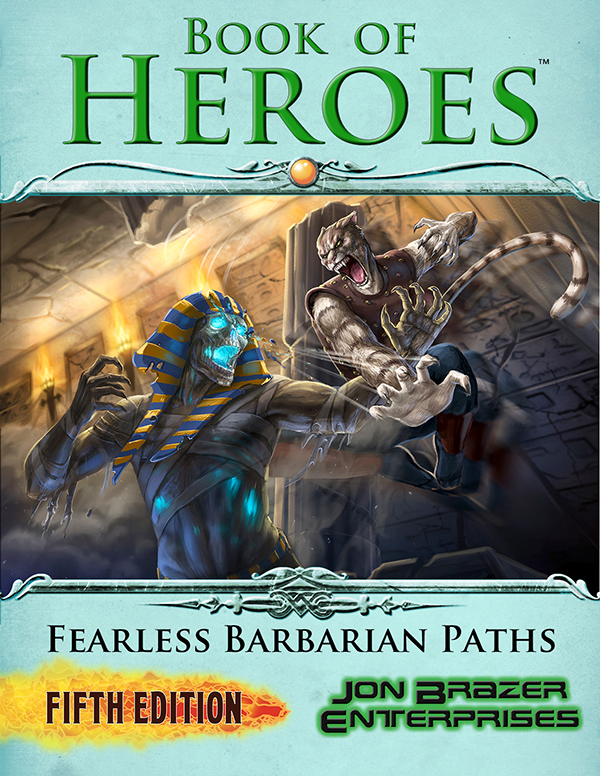 It has been a while since we talked much about Fifth Edition. This is a game we at the “office” love and enjoy regularly. We have several 5e projects in the works, but we’re not ready to talk about them further at this time.

We shared with you a very early version of this barbarian path back in 2017, but we decided on a number of improvements to it. This is a chance for you to see how our products can change during the development process. We hope you enjoy this barbarian path in your 5e game.

Download Book of Heroes: Fearless Barbarian Paths today at the JBE Shop today. You can also find it at DriveThruRPG and the Open Gaming Store.

While some barbarians describe themselves as burning with anger, the pyrorager literally catches on fire when they fly into a frenzy. Some pyroragers claim they descend from an ancient red dragon. Many scholars doubt the validity of that claim, but only voice such doubts when they are well out of earshot of any pyroragers.

When you choose this path at 3rd level, your arms and weapons erupt into flames when you rage. Your melee weapon attacks deal an extra 1d6 points of fire damage when raging. This damage counts as magical for the purpose of overcoming resistance and immunity to nonmagical attacks and damage. This damage increases to 2d6 at 6th level, 3d6 at 10th level, and 4d6 at 14th level. This damage does not stack with spells or weapons that deal additional fire damage, such as a flame tongue weapon. When your rage ends, you suffer one level of exhaustion (as described in Appendix A of the PHB).

Also at 3rd level, you become proficient with the Ignan language.

Starting at 6th level, fire runs through your veins, granting you resistance to fire damage. At 14th level, you are immune to fire damage and are resistant to cold damage.

Upon reaching 10th level, you gain advantage on all Charisma checks when conversing with elementals that speak Ignan.

Beginning at 14th level, you gain the ability to vomit forth flames. All creatures in a 30-foot line take 3d6 points of fire damage on a failed Dexterity save (DC equal to 8 + your proficiency bonus + your Charisma modifier). A successful save reduces this damage by half. Once used, you cannot use this ability again until you complete a short or long rest.