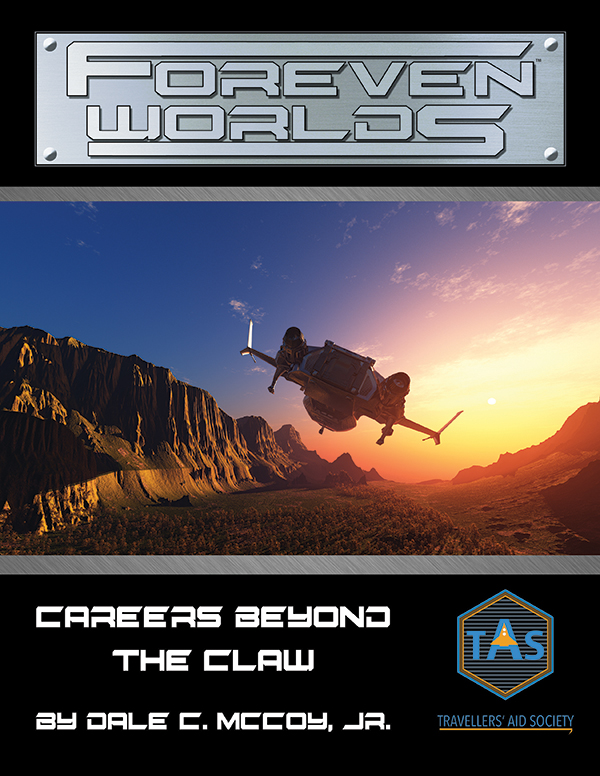 The first is a new branch of military service. The System Guard is similar to the coast guard of a modern military. They handle a mix of law enforcement and issues a full navy must deal with, but with smaller ships and they don’t head out into the deep waters, which in this case is deep space. The three assignments of the System Guard are the Crew/Line, Inspectors, and Planetary Patrol. The crew/line are the officers and enlisted personnel of the ships that make up any system guard. They deal with pirates, poachers, and ship thieves plaguing a star system. The job of the inspectors is to make sure smugglers fail to import or export illegal persons or cargo. The planetary patrol staff the orbital gun platforms, space stations and repair facilities that support the system guard ships. In the Foreven Worlds this branch of the military replaces the navy of the Imperium or Zhodani Consulate. In both of these and other interstellar governments that sport a full navy, the system guard protects the system when the baby is elsewhere and when situations do not require a military response.

The second career we are sharing today is the one that the cover image represents, the Frontierist. Those that pursue such a career to the edge of explored space go where few if any have gone before. Whether you are sifting through the ruins of some lost civilization, hunting mineral wealth where none have looked before, or attempting to change the environment of a world to be more habitable for humanoid or other sentient life forms, your work takes you where few live today. Being well beyond the ragged edge of civilization doesn’t just thrill you; it is where you belong, seeing a location in its untarnished glory, breathing air none have in countless generations, and making off with minerals none new were there before. The three most common Frontierist assignments are Archeologist, Prospector, and Terraformer.

Foreven Worlds: Careers Beyond the Claw will be out in the new year. Download all of our Traveller products exclusively at DriveThruRPG.