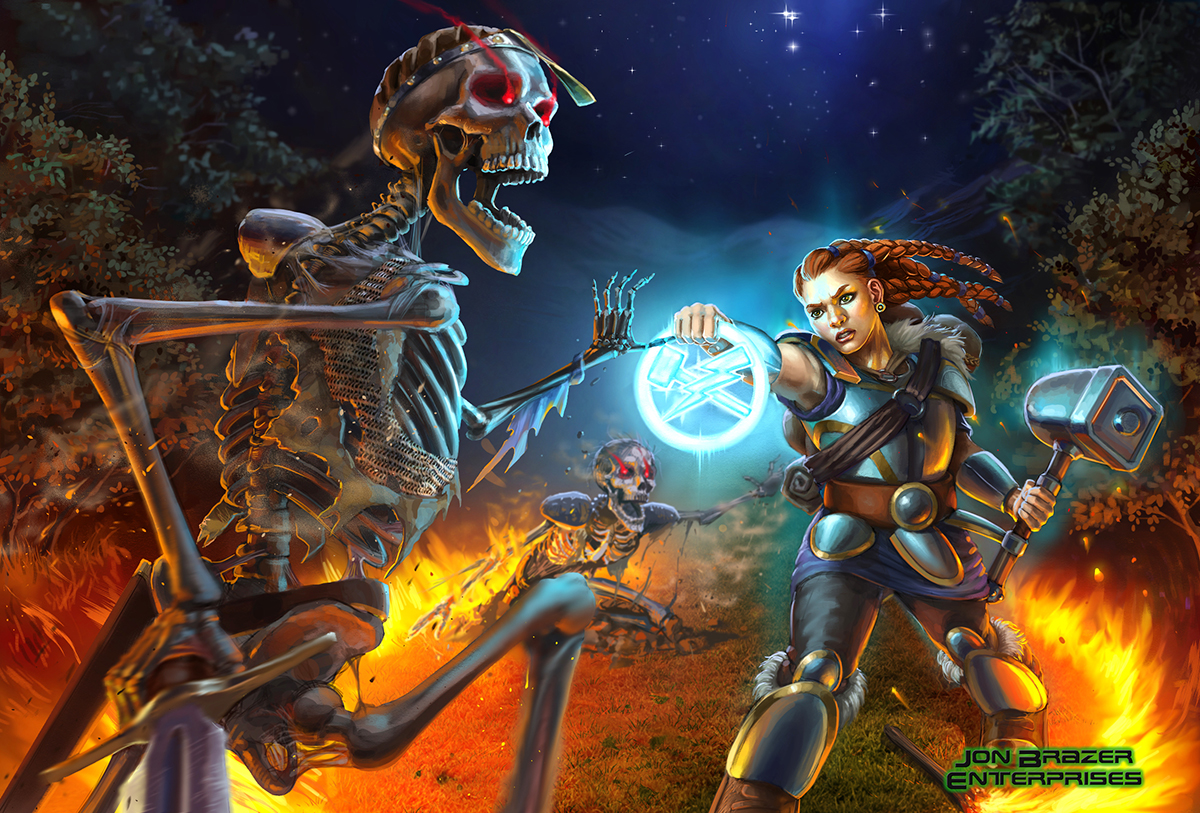 There’s a short story by Janni Lee Simner called Practical Villany that I particularly love. It’s from the villain’s point of view. The opening line is “The first thing I want you to know is that I drowned those kittens for a reason.” It’s a dark comedy about a villain talking to his latest kidnapee about his rebellious daughter that turned hero, betraying the family business. In the story, the author talks about how evil is a business while heroes are just one person. That is where mini-bosses come in. Mini-bosses are akin to mid-level managers. The real question is why would someone in a fantasy RPG world need them.

No matter which level-based fantasy game you play, you get more powerful by level. You are obviously more powerful at level 2 than level 1 and even still more powerful at level 3 and so on. The same is true for your main enemy. They didn’t try to take over the world at level 1. They worked to amass enough wealth and influence and easily outclass the adventurers at the start of the campaign. So why are they employing people that can’t hold their own against a plucky group of low levels?

Your big bad has a source of income that still needs to be maintained, and they are busy with taking over the city/country/worlds. So the actual job of generating that income has to be in the hands of some trusted aid to oversee the operation. Whether that operation is a kobold mining company digging up gold, orc hunters that sell skins for leather armor, or an ogre timber consortium, they have to perform operations far to trivial for the big bad to do. The problem comes in when they interact with the humanoid races. Do the kobolds breech into a dwarven mine or a gnome village? Do the orcs kill the cows of a small hamlet? Are the elves upset the trees are being felled? The people doing the work need direction and someone to pay them for their work, someone that represents the big bad to the workers. That is a mini-boss. Remember, any good business has lots of moving parts to it (different managers in charge of different workers at different locations all doing the same job, different departments doing different jobs, etc.). That is a lot of different mini-bosses at a number of different difficulty levels. In this case, the employees are minions.

2) Your Big Bad Doesn’t Have Every Skill or Ability

The person at the top simply can’t have every skill or talent possible in the whole world. CEOs hire accountants and lawyers to help them navigate those arenas. Your big bad trying to take over the city/country/world needs someone to advise them on the way to the crown and how to finance it. So your mini-bosses can be advisers to the big bad in their specialty field. Other possible advisers include a cleric of an influential church and the big bad isn’t a follower of the deity or doesn’t have any divine casting ability, a public relations bard to smooth over incidents like the kobolds invading the dwarven mines, and a spiritual advisory monk.

The important thing to remember with advisers is that they should fill two roles: the official one and an unofficial one. The official one is the job for which they are known. This is their day job, how this adviser is presented in the public. The unofficial one should be the real reason that person in particular was hired by the big bad. Does the financial advisory funnel money from the crown to the big bad? Does the cleric get people (more minions) to act against their interests in the name of the religion? Is the public relations bard in charge of spreading disinformation? All of these roles a big bad needs done and these make great mini-bosses.

Bad guys are not known for fighting fair. Once the adventurers have been identified as disrupting some small plans, they should have someone to deal with them. Assassination attempts have been done and the players will see that coming. Instead, trying having the big bad hire the adventurers for a job they are not qualified, like killing a monster that is more powerful than they can handle. Have the public relations bard hire them, apologizing for any previous incidents involving low-level managers, and praise them for bringing such bad actors in their organization to light. The job is something like clearing out a cave where some new miners will be going soon. The adventurers aren’t told there’s a dragon in there. The dragon will be warned and compensated for it’s trouble. Naturally the dragon will have his own minions to soften you up in your way there. The idea behind this is that if the adventurers never return, no one will miss them or possibly figure they left for another problem elsewhere. As an added bonus, the public relations bard can claim they had bad information and apologize for their near deaths. By doing this, you turn what would otherwise be a single encounter into a night’s game session and they might even believe the big bad isn’t so bad.

Every mini-boss need minions and we have some excellent ones in the Book of Beasts series, available now for Pathfinder, Fifth Edition, and 13th Age. Download them now.