State of the Enterprise 2018

Hey everyone. It is that time of year again where I look back at the year coming to a close and forward to the year ahead. 2018 was a big year for the company and for the world at large. In many ways it was the year I expected even hoped for and many others it was not the year I expected at all.

Incase you hadn’t heard, I moved half way across the USA this year. I use to live in New Jersey and now I live in Missouri. My wife got a job that she has been working towards for some time now. We’re thrilled about this, but it has impacted my writing schedule.

What we hoped would happen but didn’t really expect was us buying a house. So in the past 4 months, we moved twice. Even right now, I’m still moving boxes that we never had the chance to unpack after the first move. So my writing schedule has been impacted again. If you want to know why we have not produced much since GenCon, that’s the primary reason (more on other reasons in a bit).

Another wrench in the schedule is the announcement of Pathfinder Second Edition. I guessed this was coming a while back, but it still took me by surprise. We were just starting to get a solid stream of high level adventures under us when the announcement came. So we made our Pathfinder adventures a priority and we got almost all of them published before the release of the 2e playtest. I’m sad for the ones we cut from the schedule but it is entirely possible they will be seen in the future, either as Pathfinder 2e adventures, Fifth Edition adventures, possibly even 13th Age, or dare I say it Pathfinder 1e adventures.

As my own recent poll revealed, PF2e is not as popular as I (and many others) expected it to be. There still may be people playing PF1e for quite some time. We will keep monitoring the situation as things develop. Frankly, I don’t expect us to make a final decision on as to whether we are going to 2e or staying 1e (or even doing both) until we see the final rules and the compatible license. However, if you had asked me about it six months ago, I would have just assumed we’re going 2e and that is that. The fact that we’re considering other options should give you an indication of the situation.

The current push we are on is to make all of our Pathfinder adventures and other supplements available for 5e. We want to have just as much if diverse library of material for 5e as we do Pathfinder.

One thing we are doing with 5e we have not done in years with Pathfinder is get our books into distribution. Deadly Delves: Temple of Luminescence will be our first adventure making it’s way into game stores for this game. Shortly thereafter will follow Along Came a Spider. The latter was first released when 5e was still young, and our experience with the game was rather low (as was everyone’s). Since then we’ve leveled up our 5e game and we have plans for 5e supplements both print and PDF well into the new year. These include conversations of existing Pathfinder material as well as brand new supplements that are never seen before.

That was what a decent amount of my time has gone to as of late. When I said above that the move was the primary eater of my time, well working through the logistics to get this set up has another major time investment. It will be well worth it when all is ready to go.

“Look for that in 2018.” That is what we said concerning several projects for Traveller in the State of the Enterprise 2017. So it is fair to say that things have not gone according to plan this year. We released our first single ships last month… and that is all we published this year for Traveller. Needless to say that was not the plan this time last year. We still have the last two parts of the Prelude to War adventure path. We have a number of monsters and vehicles that we want to turn into their own books. And we want to publish a number of small settings that you can integrate into the Foreven Worlds, elsewhere in the Third Imperium, or somewhere in a different setting. So we have our hands full for the year ahead. 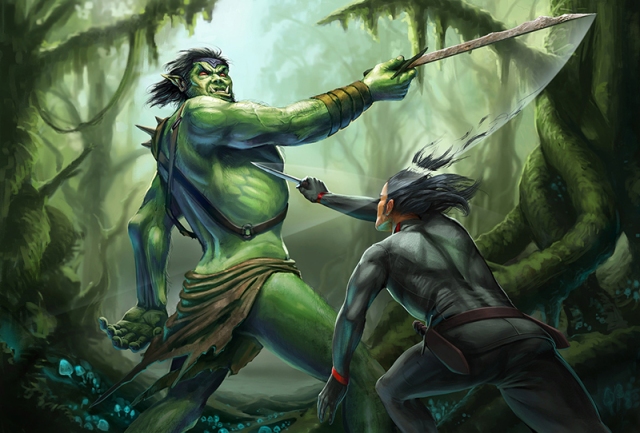 We continued our 13 Class Options series with 13 Wizard Cantrips and Spells and 13 Cleric Domains and Spells. The still not yet named 13 Rogue Options has fallen victim to the same time crunch we’ve described above from the moves and the Pathfinder schedule reschuffeling. Plus, we want to take the time to make each one that much more awesome. When we are satisfied with it, you’ll be the first to know.

After the “core four” classes, we plan to get to the others published. Let us know which you would like us to tackle sooner than others. We’d love to hear your thoughts.

The next few months, JBE is focusing on 5e, Traveller, and hopefully some 13th Age as well because they received so little love last year. That will be our plan for the next four-to-six months. Beyond that, we have a number of ideas but nothing concrete. One thing is for sure, 2019 is going to see some big changes from us. We have all the printing logistics worked out, and I will be working on the company full time in the new year. This means we finally have both the means and opportunity to do things we have been dreaming about for a decade. I can’t say for sure yet which way we will be going, but expect big things from us this year.

By big things, I do mean sizable books or possibly our own system or our own setting. The last time we tried something like this was with Shadowsfall back in 2012 (almost 7 years ago!). Back then, we had the means (being in game stores then as well) but really lacked the opportunity to do it at the level we wanted. Having the experience from publishing so many more rules supplements and adventures since then, we are more prepared to embark on this dramatic step.

The road ahead is exciting, and we are ready for this adventure. We hope you will join us on our epic quest.

That pretty much wraps up our look back of the year and the look ahead. So from all of us, we hope you enjoy your time with family and friends this season, and we will see you in the new year.

← 5e: Giant Gingerbread Golem
Traveller: What Monsters Do You Want to See? →