5 Questions Every Rogue Should Be Able to Answer 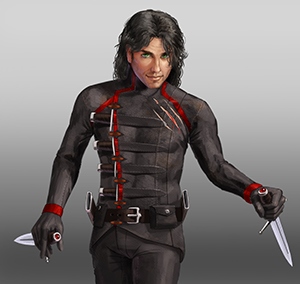 Comparing a fighter with a rogue is a healthy exercise and helpful when trying to understand how these characters are fundamentally different. When in a fight, a fighter walks up to the thing and beats it down until it is dead while a rogue will look for the creature’s weak point and strike there. When trying to get something from a cave where a monster lies sleeping, a fighter will most likely wake it up with the clanging of its armor and then have to kill it before getting the treasure while a rogue will quietly sneak past it and just take it. When trying to talk their way into a room past a guard, a fighter will try to intimidate the guard into letting them pass while a rogue may intimidate but will more likely turn on the charm and convince the guard that they should already be in there. The common thread in all of them is that a rogue relies on looking for the opportunity, and that is where the heart of your character should lie.

1) Why Did You Start Seeing the Opportunity in Every Situation?

Being a rogue doesn’t mean that you look for an opportunity; it means that you just see the opportunity in every situation. You were not born seeing the opportunity. This is a survival mechanism; you were made. So something had to happen over and over again, and you compensated by looking for ways to fight back. This happened so often that it comes to you as easily as breathing. So what was it? Did you grow up an orphan on the street and had to hide in order to avoid the bigger kids? Are you the scion of a noble and were constantly tricked by someone jealous of your station? Was one of your parents an abusive drunk that would beat you until you could find ways to keep the drunk from attacking before the beatings began? In short, something in your life was not pleasant for a long time and this is how you survived. What was it?

2) How Did You Escape that Bad Situation?

You’re an adventurer and are no longer in that bad situation. The story of how you got out of there is one that will hold considerable meaning to you as it will be your goto backup plan the moment the chips are down. Did you run away from your problem? This will probably mean that if the battle turns badly, you may well abandon your friends to get away. It will also mean that you take feats and other class choices that let you move faster and get away without taking attacks from your enemies. Did you finally confront that abusive parent and say, “No more!” If that were the case, you’d probably make character choices that let you attack before anyone else, striking hard with that first blow, ending the fight right away. It also means you would rush into battle faster than the fighter. Did you outsmart your jealous rival, tricking them as you were? This means you will rely on far less conventional tactics than most characters. Maybe you will use a net, whip, or other weapon that incurs some type of penalty onto your enemy. Your method of escape is a proven method of survival in your mind. What is it?

3) When Did You Fight Your Instincts and Trust Someone?

Trust is a difficult thing when you have been treated in some fashion that turns you into a rogue. However, those that do not trust lead very lonely lives. Sooner or later you have to take a chance and trust someone. Come up with three examples. Two of them should be good friends, even if you have moved on and have not talked to them in a long time. The third should be someone that let you down. It could be out and out betrayal, but it could also be something as ordinary as simple human failing. Remembering those that you trust is what keeps you trying to trust again. Feeling that pain of being let down should always temper that trust, keeping you from getting too close.

4) What Actions Will Make You Trust Again?

As mentioned previously, you don’t trust easily. To a rogue, actions speak louder than words. You have heard words over and over again and no longer trust them. “I won’t get drunk and hit again,” “I only want to help you, “I won’t tell anyone your secret.” It doesn’t matter. You’ve heard all the lies. So what does someone have to do to make you trust them? Is it someone that makes sure you get a fair share of the gold? Someone that stands up to a bully? Honesty no matter how much it hurts? What is it that will let you put your guard down to someone?

5) How Does Staying With Your Fellow Adventurers Benefit You?

While you will not sell out your fellow adventurers, you can walk away from them at any time. So why do you stick with them? There must be something in it for you? Money is the obvious answer. Going on adventures makes you rich. Yet you could find another group of adventurers. Why do you stick with this particular group? Do you trust one of them (or *gasp* all of them)? Are you doing it as a favor for someone that you want a favor from? Did someone you trust ask you? Or are you with them only for the moment and could leave when you get paid? Why are you still in this group?

Edward grew up a noble but renounced his birthright because of all the political games he had to play. He did run away, stealing to survive from that day forward. It was the Princess Yolanda that made him trust again. So when the King caught Edward and Yolanda together and he talked with them, Edward trusted the King as well. Now he adventures to prove himself worthy of the Princess’ hand and the King’s approval, trying to amend his past crimes.

Edward stands tall on the cover of Deadly Delves: Rescue from Tyrkaven. Download this adventure for Pathfinder and Fifth Edition. Download these and all of our books today using coupon code “holiday2017” to get 30% off this and everything else at the JBE Shop now through January 31, 2018.