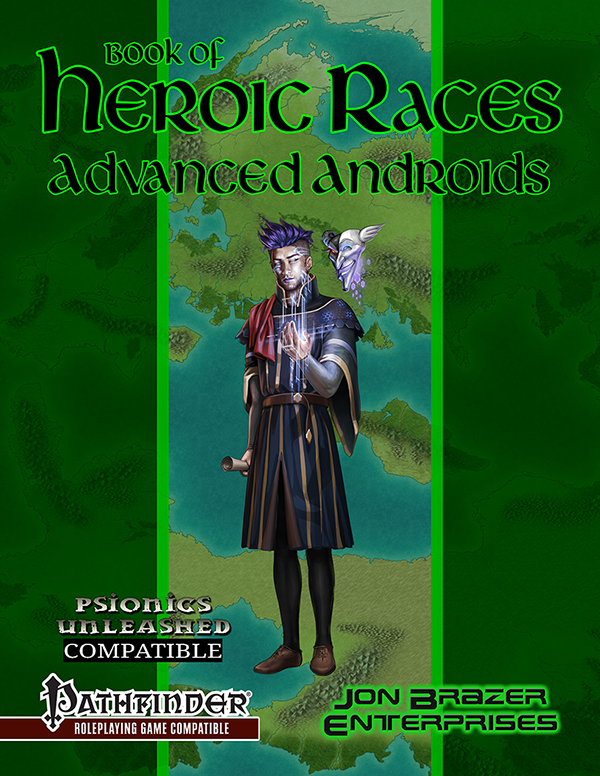 First off, my apologizes. My day job has been kicking my butt lately and I have not done as good of a job of keeping up on my previews and other communication as I would have liked. Having said that, let’s dig into Advanced Androids.

The Book of Heroic Races: Advanced Androids is a sharp change from our normal races, in that we are covering what cannot be considered a fantasy race. While it is true that the living machines have their origins in Frankenstein/Living Prometheus, this race is quite different from that story. This race is all about an artificially intelligent machine that has a human-like core to them. Since their base type is humanoid, an argument can certainly be made that this race is closer to the Borg (particularly the Hugh Borg) than to Commander Data and should be called cyborgs instead of androids. However, that would not account for the living soul within that can do and a new soul coming into the body. That separates them from cyborgs since members of that race die when the body dies. Androids live on, even if the soul exits the body and a new one enters.

So what exactly is an android then and how does it fit into a fantasy RPG? They fit in in the same way that Expedition to the Barrier Peaks fits into fantasy, by having science fiction crash land into your fantasy game. Certainly, the race is not for everyone. However, the exact same can be said about psionic races, dragon people, undersea characters, lizardfolk, or any other race in this the upcoming Book of Heroic Races: Advanced Compendium. That was one of the reasons why we chose to include it.

Down to the business of what exactly an android is in terms of Pathfinder. Well the best way to answer that is to share with you their racial traits.

+2 Dexterity, +2 Intelligence, –2 Charisma: Androids have swift reflexes and are very intelligent, but have difficulty relating to others.
Humanoid: Androids are humanoids with the android subtype.
Medium: Androids are Medium creatures and receive no bonuses or penalties due to their size.
Exceptional Senses: Androids have darkvision out to a range of 60 feet and low-light vision.
Alert: Androids gain a +2 racial bonus on Perception checks.
Constructed: For the purposes of effects targeting creatures by type (such as a ranger’s favored enemy and bane weapons), androids count as both humanoids and constructs. Androids gain a +4 racial bonus on all saving throws against mind-affecting effects, paralysis, poison, and stun effects, are not subject to fatigue or exhaustion, and are immune to disease and sleep effects. Androids can never gain morale bonuses, and are immune to fear effects and all emotion-based effects.
Logical: Androids have problems processing emotions properly, and thus take a –4 penalty on Sense Motive checks.
Nanite Surge: An android’s body is infused with nanites. Once per day as an immediate action, an android can cause her nanites to surge, granting a bonus equal to 3 + the android’s character level on any one d20 roll; this ability must be activated before the roll is made. When an android uses this power, her circuitry-tattoos glow with light equivalent to that of a torch in illumination for 1 round.
Languages: Androids begin play speaking Common. Androids with high Intelligence can choose any additional languages they so desire (except for secret languages such as Druidic).

Download the Book of Heroic Races: Advanced Androids for Pathfinder at the JBE Store. You can also download it at DriveThruRPG/RPGNow, Paizo.com, and the Open Gaming Store.