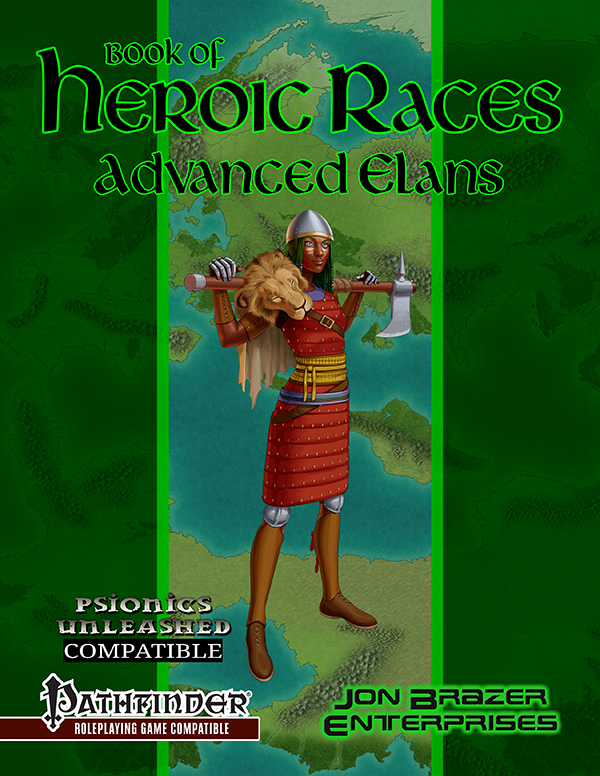 We’re putting the finishing touches on Book of Heroic Races: Advanced Elans right now and just thought we would share with you just what exactly is an elan.
First off, the elan race was not published by Paizo for the Pathfinder Roleplaying Game, but by Dreamscarred Press in Ultimate Psionics. They come from the 3.5 psionics rules and have been updated by Dreamscarred along with the rest of that rules subset. If you have not checked them out yet, I highly recommend you give them a look as they are faithful update and are well balanced.

As far as the race itself, elans are a secret cabal of people that have been infused with psionic energy and can live forever, barring disease or a violent death. They appear slightly off from a normal human, practically bursting with magical energy.

At their core, these are psionic being that chose a life of psionic, so this supplement is filled with psionic options for your game play, particularly flavored for the elan race. If you are a fan of psionics, this is a supplement that you will want to check out.
Today we are sharing the elan racial traits. Stay tuned to JonBrazer.com all week for more details of what is inside fantastic racial supplement.

+2 to One Ability Score: Elans gain a +2 bonus to one ability score chosen at creation to represent their varied nature.
Aberrant Blood: Elans are humanoids with the aberrant subtype.
Medium: Elan are Medium creatures and have no bonuses or penalties due to their size.
Normal Speed: Elans have a base speed of 30 feet.
Aberrant Nature: Although human in appearance, elans are seen as slightly “off” by non-elans. They suffer a –1 penalty to Charisma-based skill checks when dealing with non-elans.
Naturally Psionic: Elans gain the Wild Talent (UP) feat as a bonus feat at 1st level. If an elan takes levels in a psionic class, she instead gains the Psionic Talent (UP) feat.
Resistance (Su): Elans can use psionic energy to increase their resistance to various forms of attack. As an immediate action, an elan can spend 1 power point to gain a +4 racial bonus on saving throws until the beginning of her next action.
Resilience (Su): When an elan takes damage, she can spend power points to reduce its severity. As an immediate action, she can reduce the damage he is about to take by 2 hit points for every 1 power point he spends.
Repletion (Su): An elan can sustain her body without need of food or water. If she spends 1 power point, an elan does not need to eat or drink for 24 hours.
Psionic Aptitude: When an elan takes a level in a favored class, she can choose to gain an additional power point instead of a hit point or skill point.
Languages: Elans begin play speaking Common. Elans with high Intelligence scores can choose any languages they want (except secret languages, such as Druidic).